Traditionally, blocks are modeled as fixed effects, meaning that if the experiment were to be repeated the same block levels would be used. This is most appropriate when future experiments will make predictions at the same block levels present in the original experiment. For example, suppose the block factor in a response surface method (RSM) design represents three different machines, Machine 1, Machine 2, and Machine 3. If we model the data and use the model to predict values for those same three machines, then a fixed effect model for blocks was appropriate.

In many cases, however, it is more appropriate to model blocks as random effects – never to be repeated. For example, suppose that we seek to draw conclusions about an entire population of machines. Then our experiment involves selecting a sample of three machines at random from the warehouse. If the experiment were to be repeated, we would likely come up with different machines. Or suppose we must break up our runs into two days and want to block this out. These days will never come again: Time marches on! Thus, days should be treated as random, not fixed blocks.

Modeling blocks as random effects and treatments as fixed effects requires the same mixed model analysis tools as those introduced in the Split-Plot RSM tutorial.

Random samples of galvanized steel were selected from a warehouse supply on each of 12 dates: July 11th, July 12th, July 20th, August 7th, August 8th, August 14th, August 20th, August 22nd, September 11th, September 24th, October 3rd and October 10th. These are the block levels. In this case it is clear that the block levels refer to dates in the past and will never be run again, so treating them as a random sample from a larger population of days makes some sense.

Open the shear-strength data set in Stat-Ease 360 by selecting Help, Tutorial Data, and Shear Strength. The first 25 runs are shown below. 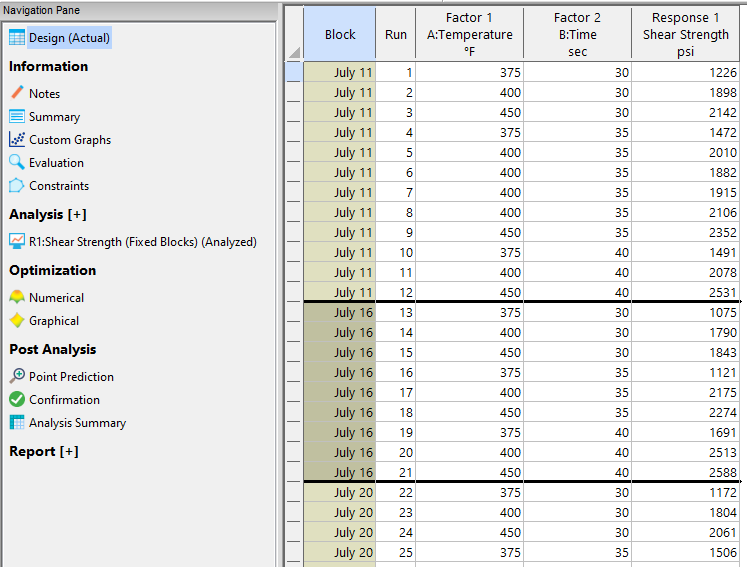 The first 25 runs of the bonding shear strength design.¶

This file contains one analysis where blocks have been modeled as fixed effects. Click on the analysis node R1: Shear Strength (Fixed Blocks) and then click on the ANOVA tab to see the results.

Note that the standard deviation (Std. Dev.) on the Fit Summary does NOT include a contribution from the blocks. This means that interval estimates at future blocks (future days in this case) may not adequately capture the actual variation we will observe in the future [Gan00].

Next, select Random Effects from the drop down under the text that reads “Analyze blocks as”. This triggers the application of a Mixed Model using Restricted Maximum Likelihood (REML). Now press Start Analysis.

The view will switch to the Model tab. Click on the Configure tab once more to examine the setup. Your analysis configuration should match the figure shown below. 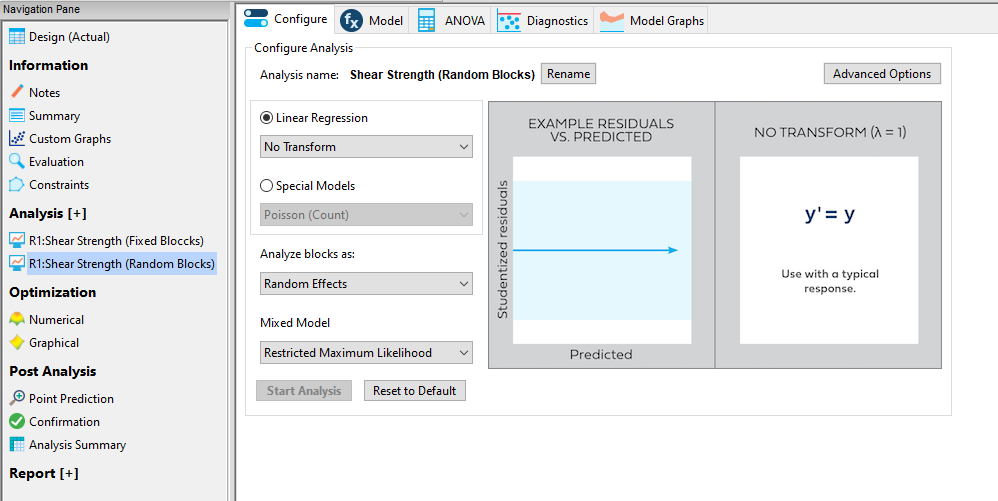 Configure the blocks to be modeled as random effects.¶

Click the Model tab. Select the Quadratic model from the Process Order drop down. This is the same model analyzed in the analysis with fixed blocks.

Select the Design Model from the Process Order drop down.¶

Next, click on the ANOVA tab. As with the original ANOVA, the analysis suggests that the quadratic effects in time and temperature are significant. 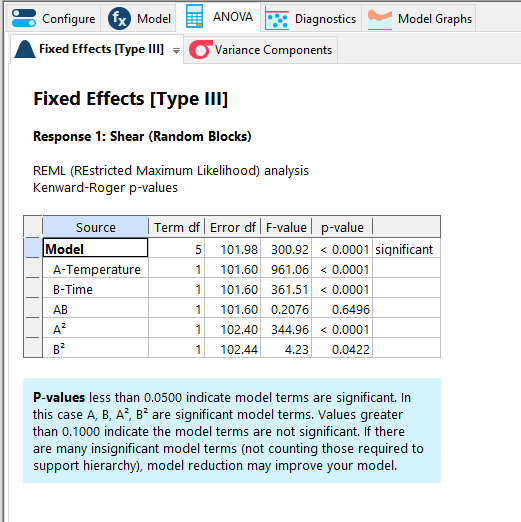 The ANOVA for the random block analysis.¶

This between-block variation is included in the standard deviation reported on the Fit Statistics tab and will inflate the confidence, tolerance, and prediction intervals, unlike the case where blocks are modeled as fixed effects. 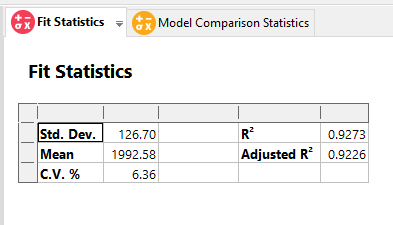 The standard deviation includes a contribution from the block variation.¶ 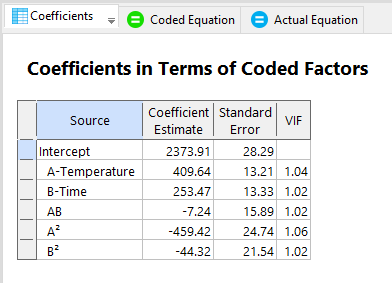 Finally, click on the Point Prediction node to compare the intervals between the two analyses and examine the confidence and tolerance intervals.

The mean has shifted slightly to reflect the population mean and the intervals are wider due to the estimate of the between-block variation. For the random block model, predictions are applicable to future days provided we can assume that future dates can be treated as samples from the same distribution as the original dates.

Analyzing blocks as random effects allows us to make predictions at block levels not included in the experiment, requires fewer parameters to estimate, and results in more precise estimates for the factors we do care about [GJ11].

Jitendra Ganju. On choosing between fixed and random block effects in some no-interaction models. Journal of Statistical Planning and Inference, 90(1):323–334, 2000.